Since the Earth’s inception volcanoes have been releasing gases necessary for life to evolve. The associated process of recycling the Earth’s crust has concentrated natural elements that modern society relies on, from  potash and sulphate for agriculture to lithium for technology and gold for commerce. As a result, communities across the globe have historically converged upon areas of active volcanism. Increased urban migration and rapid population growth within these established settlements has meant that some of the world’s most densely populated centres are within a stone’s throw of some of the most dangerous active volcanoes.

The countries of Central America have developed amidst a high concentration of large volcanoes.  In this region a collage of small tectonic plates is sandwiched between the North and South American continents. Their geometries and evolution have sculpted the unique physiography that connects two of Earth’s largest tectonic elements. The resulting influence of geography and volcanic processes in this region has led to a dramatic, fertile landscape rich in biodiversity and precious minerals. These natural abundances fostered centres of culture and civilisation, as well as conflict. 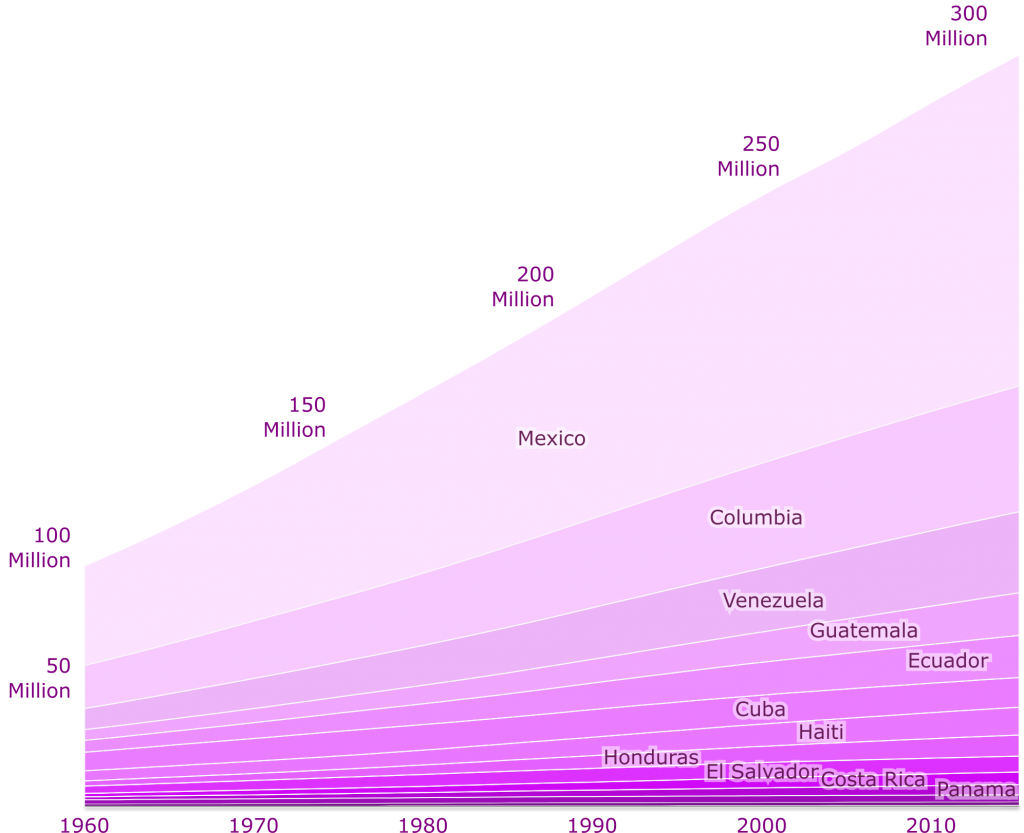 Although development in Central America and the Caribbean is trailing many other Latin American countries, urban migration ranks highly in the global context. This is in stark contrast to 50 years ago when rural-dominated populations typified this region. Back then these economies relied on the farming and export of cash crops such as bananas and coffee. Today’s increasingly urbanised populations, particularly in countries like Costa Rica and El Salvador, have demographics that are beginning to mimic those of larger, more developed countries like Mexico and Columbia where between 75 and 80% of the population live in cities. These trends combined with the restrictions imposed by the rugged and narrow geography mean populations and critical infrastructure in Central America are highly susceptible to the activity of the numerous active volcanoes traversing the landscape. The region’s volcanoes have a history of devastating eruptions, many of which have occurred since 1900 AD. Central America and its neighbouring continental and island nations provide a unique opportunity to investigate the relationships between population and volcanism where just one single major event could damage the already fragile economic and social stability of any of these developing nations.

“the region’s population has nearly tripled in 50 years“

The continental crust of Central and South America shares a convergent tectonic boundary with oceanic crust that was produced beneath the Pacific Ocean. The thin and dense oceanic plates are being consumed by a subduction zone that stretches 10,000 kilometres from Patagonia to the Gulf of Mexico. The subduction of this sea floor forces wet rocks into the mantle. These rocks interact with very hot mantle, release volatile gases and produce localized zones of less-dense, melted rock (magma). The magma rises to the Earth’s surface along corridors defined by breakages (or fault zones) in the crust. When the magma reaches the surface a volcanic eruption takes place with successive events leading to the growth of a volcano. Successive events typically congregate within major fault zones that over time build up to form volcanic chains, features that are particularly conspicuous at the margins of the Pacific Ocean (see Pacific Ring of Fire). The position and alignment of volcanic chains evident throughout Central America reflect the orientation of major fault zones whose kinematics (movement) are linked directly to subduction processes occurring in the underlying mantle. 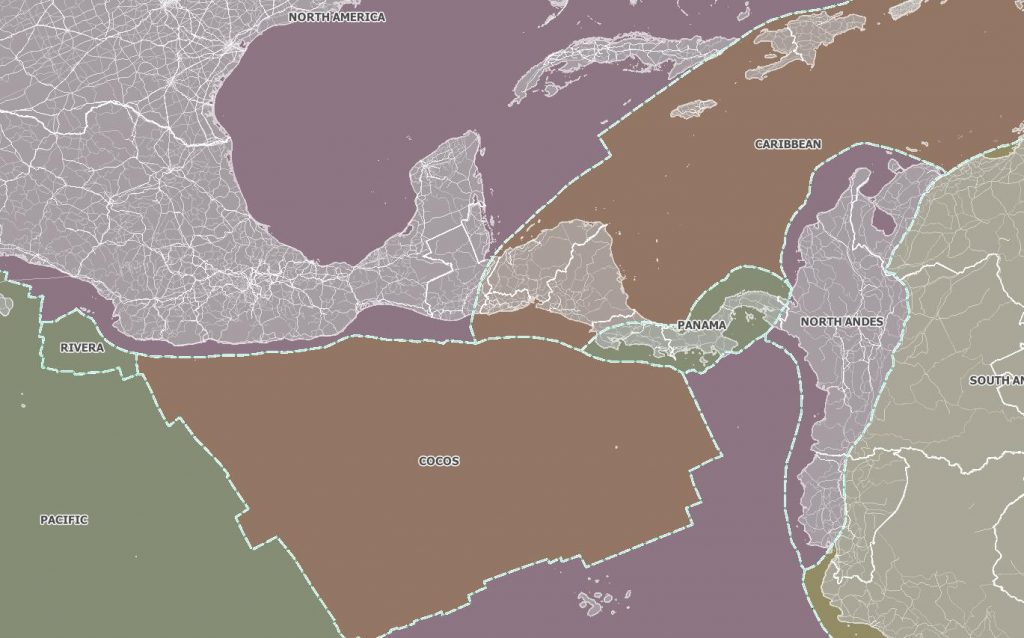 With the exception of a small “volcanic gap” in eastern Panama the pattern of volcanism is very consistent in Central America and defined by a 1,400 km long chain of activity. This active volcanism is occurring along the western edge of the Caribbean Plate (including the severed Panama Microplate), that began its growth during the Cretaceous. Importantly, the eastward growth of this plate has left its volcanic mark on the Caribbean with extinct segments of volcanic chains being preserved from Jamaica to Puerto Rico in the north and Venezuela to Curaçao in the south. Currently there is a subduction front that penetrates the Atlantic Ocean generating small, powerful arc volcanoes that have a deadly reputation.

Significant and most recent eruption:

Pyroclastic flows and surges devastated landscape up to 8 km around the volcano; lahars destroyed key infrastructure; 2,000 people were killed; ash deposits up to 5cm thick fell 70 km from source.

Several historical eruptions have demonstrated the potential for significant loss of life due to volcanic eruption. The 1902 Eruption of Mt Pelee on the island of Martinique sent a pyroclastic flow down the mountainside that completely destroyed the city of St Pierre killing some 30,000 inhabitants. In Central America the number of major cities within the direct blast radius (5-30 km for VEI = 5) of a large explosive eruptive centre (e.g. El Chichon, Mexico) is low. However, further effects can have long-lasting impact on a nation’s social and economic development. The relatively narrow isthmus connecting North and South America (i.e. 50 km at its narrowest) means there is a particularly high risk that volcanic activity could sever vital transportation infrastructure. For those economies whose main income is derived from the transportation and sale of produce from source to ports for the export market (e.g. Guatemala and Nicaragua) the destruction of these links could be economically devastating.

The emission of volcanic ash can have particularly widespread effects. Although strongly controlled by prevailing weather patterns, ash-fall in susceptible areas can lead to the closure of airports as the corrosive properties of volcanic ash are particularly destructive when they meet jet turbine engines. This ash also damages electricity transmission lines causing overloads and power outages. If eruption-sourced airborne particles pass across a major city respiratory illness becomes a significant concern and can impact employment and government health-related costs.

Maps of population density showing a strong correlation between locations of volcanoes and densely populated regions.

There is no easy way to predict the timing and size of a volcanic eruption. But much effort is going into the setup of networks that allow active monitoring as well as the integration of vast arrays of collected data (e.g. WOVO). Despite the great expense being made to accurately monitor these phenomena globally, a need for increased global public awareness is required to  better manage the hazards associated with volcanic eruption. More awareness translates directly into greater investment into research and infrastructure required to mitigate this threat. Media attention given to eruption pales in comparison with other global issues such as politics and terrorism.

Governments across the globe are increasingly acknowledging their vulnerability to natural hazards and providing funding for risk mitigation programmes to protect their people and economies. Organisations such as Guatemala’s CONRED work hard to reduce the impact of disasters like volcanic eruption. In an increasingly globalised context the exchange of knowledge between organisations like CONRED is facilitating a more global understanding. It is important that data collected and  learnings amassed at the local scale are incorporated into the repositories of global understanding like the model used by WOVO (and that all the information be freely accessible). Empowered citizen scientists can help build critical evaluations of spatial relationships using open source GIS technology like QGIS. Visualisation and mapping of these relationships provide the means for education and increased public awareness, which will be good news for us all.

July 2015 – formation of multiple pyroclastic flows, the largest of which transported hot ash 10.5 kilometres from the vent

Significant and most recent eruption: 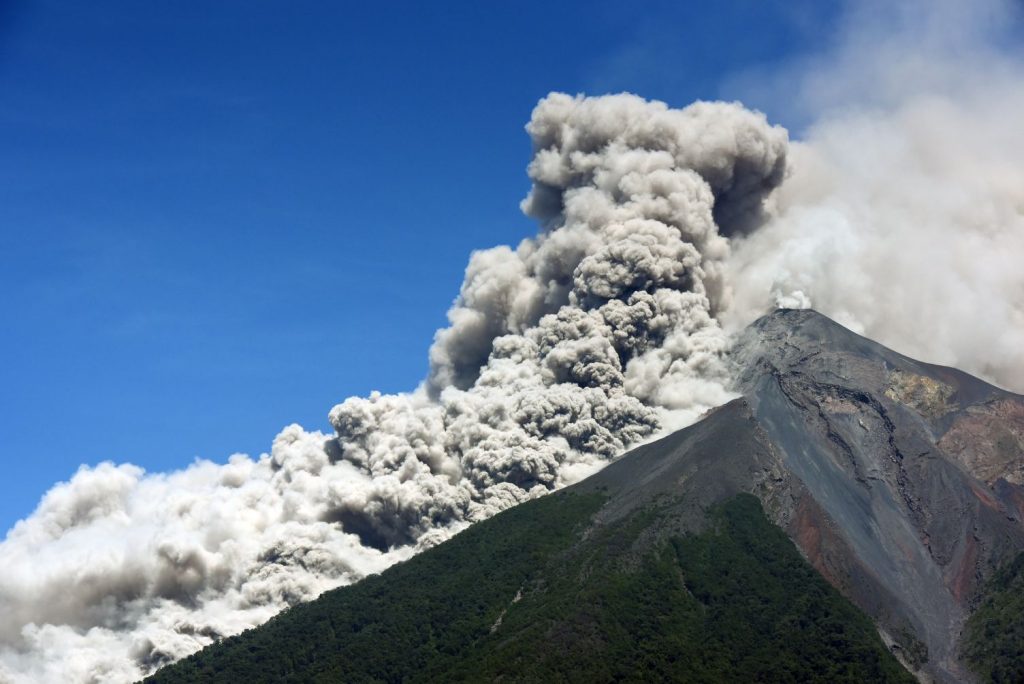