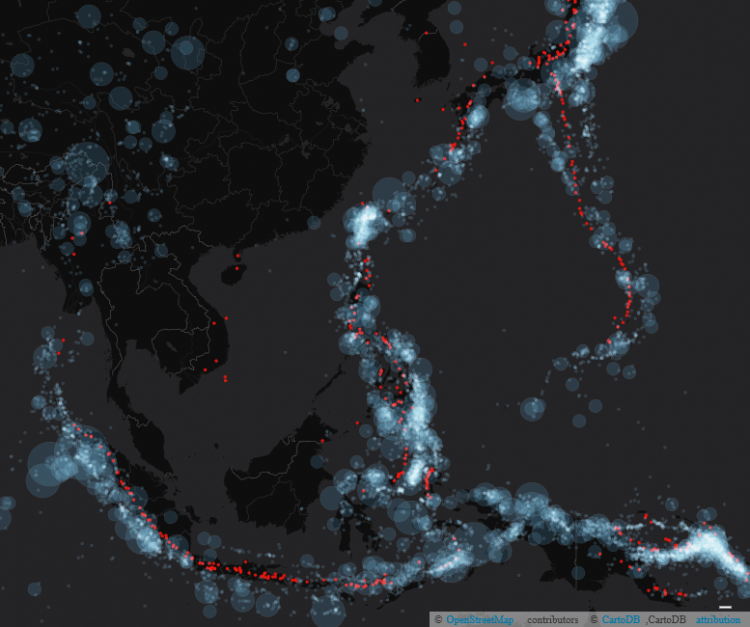 As global population expands there is a proportional increase in the number of people living within areas under threat from natural hazards. A projection of trends from historical data suggests that over the course of the 21st Century global loss of life caused by earthquake-related events alone will extend into the millions.

To minimise the impact natural hazards have on society, changes to government policy and the implementation of pre-emptive measures, such as engineering guidelines, hazard mapping and evacuation procedures have been emplaced. These measures are especially effective when operating in conjunction with swift and efficient disaster response procedures (e.g. search and rescue; delivery of aid). However, our ability to predict the type, scale and after-effects of any given hazard remains the primary control on disaster minimisation. Prediction is dependent on the breadth and quality of data gained through human observation and scientific record, and the recognition of patterns that can be used to forecast and characterise future or impending events.

The role of technology is key to forecasting events and the management of natural hazards. In the 21st Century we have seen many advancements in the ways data can be collected, stored and analysed; including:

With better technology, spatio-temporal patterns are interpreted more efficiently and our understanding of the Earth processes underlying hazards can be better used to protect and provide aid to communities.

The theory of Plate Tectonics describes the fundamental Earth processes that influence the distribution and style of natural hazards. The way we study tectonic processes is being revolutionised by initiatives that provide Open Data networks via the public domain. Scientific engagement with the wider community is facilitated through the application of Creative Commons licensing, the attribution of data and the publishing of peer-reviewed Open Access scientific articles.

A fantastic example of open data is the 1900-2012 Global Instrumental Earthquake Catalogue. This resource is publicly available through the International Seismological Centre and contains information on approximately 24,000 large earthquakes of magnitude 5.5 or greater recorded between July 1900 and December 2012. Having access to such a dataset enables visualisation of patterns in areas of active seismicity and where spatial correlations may be influencing other events that impact on the human environment. Furthermore, these data have significant implications for our understanding of plate tectonics as earthquake activity images global features such as plate boundaries, intraplate fault zones, oceanic fracture zones and spreading ridges. It can also be analysed to infer subduction polarity and information regarding crustal depth and structure. But, perhaps most importantly these data enhance our understanding of global processes, providing valuable insight when making hazard assessments (e.g. earthquake, landslide, volcanic and tsunami).

When you visualise ~100 years of global earthquakes on a map, a pattern emerges. These natural phenomena cluster in zones that delineate the active margins of the Earth’s tectonic plates. There is also a strong spatial relationship between these active margins and locations of active volcanoes. This observation is nothing new, and I’m sure many of us learned about the “Pacific Ring of Fire” as kids at school. But congregations of geologically active phenomena underpin some significant justifications regarding the way in which tectonic plates interact and how the Earth’s surface has evolved through time. Of particular significance is the way in which parts of the Earth’s crust are consumed by the process of subduction. When two tectonic plates converge one can become thrust beneath another, particularly when it is of the thinner, denser variety such as those found today under the Earth’s oceans. The “lower plate” is gradually forced down releasing water as it descends which lowers the melting point of the underlying mantle and forms magma. The “overriding” plate becomes uplifted to form mountains, and volcanic chains (or arcs) develop when the buoyant magma ascends and erupts at the surface parallel to the plate margin. The process of subduction is one of the most important in understanding earthquake hazard as it is associated with the generation of the largest and most devastating type of earthquake known as the megathrust.

Both earthquakes and volcanoes impact the landscape, but it is the volcanoes that are most obviously preserved (often in the form of an intermittently smoking cone). Whilst we can easily relate to changes that volcanic eruptions have on a landscape (take the 1980 Mt St Helens eruption for example), the changes earthquakes cause become quickly masked by time and we can be complacent about their frequency or hazard potential as we are not reminded of them on a day-to-day basis. But as the global data shows, earthquakes are far more common and historically have far greater potential impact on human life.

We are reminded of the power of Earth processes every once in awhile when large seismic events occur. The effects of these can be devastating, particularly when they occur near densely populated regions where they can significantly impact the lives of those unfortunate enough to be caught in building collapse, landslide or tsunami. Many of these devastating events are marked in the seismic record and feature prominently in the 112 years of data from the VOTW Database. The following examples are still fresh in our memories:

Epicentre: off the west coast of Sumatra, Indonesia

The Sichuan Earthquake represents a different type of earthquake to the previous two examples. Major intraplate fault zones within central China are accommodating uplift of the Tibetan Plateau as a consequence of the collision of the Indian Plate into the Eurasian Plate. The edge of the Tibetan Plateau is marked by a major escarpment, to the east of which is a fertile, densely populated area known as the Sichuan Basin. The earthquake epicentre was only 80 kilometres from the city of Chengdu with an urban population of 4.5 Million. On 12 May 2008 this structure ruptured causing widespread collapse of buildings, many of which had been poorly engineered.

Very recent events such as those that occurred in Nepal in 2015 (that added a further 8,000 lives to the recent global death toll) remind us how far we are from protecting the global community from one of the Earth’s most natural processes. It is clear that much can be gained by monitoring and analysing datasets like this one and it gets much more involved than simple visualisations such as those shown here. The forces driving earthquakes can be represented by a large number of dimensions (or variables) and scientists make use of these complex data to characterise events and understand the local structure in 3D.

When the data are made available to everyone, we can all benefit through public awareness, inter-disciplinary collaboration and data integration. This way the potential for innovation and scientific progress is awesome and notably, any improvements in the area of hazard management have the direct consequence of saving lives.